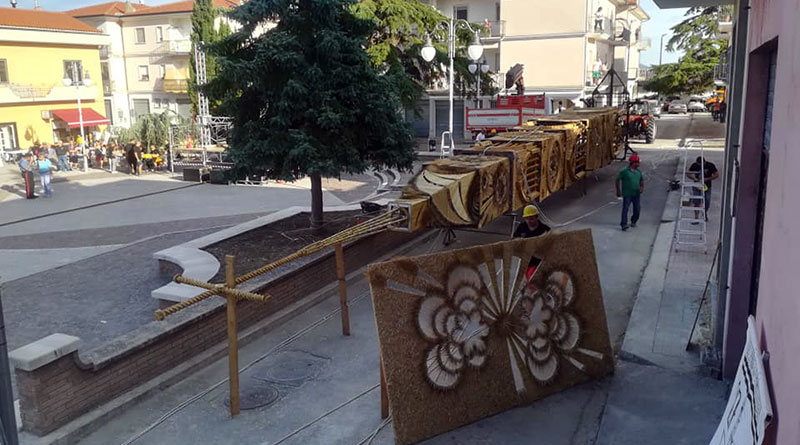 The “pull of the giglio” which is repeated every year on August 27th in a show of music and dance, represents the culminating moment of a journey that the Villanovese community starts in early July, with the harvesting of wheat that is mowed by hand to leave the stem long enough to weave it, and the collection of wild oats for the creation of the decorative elements that will cover the giglio. This devotional machine represents a votive offering to Saint John the Baptist and consists of a pyramidal obelisk up to 28 meters high, divided into 5 layers with a spire. The giglio is covered with panels of straw and artistically intertwined oats. The celebrations officially open on the Sunday before August 27th with the ritual “lift” that brings the artistic machine from a supine to a vertical position. After the “pull” of August 27th, the giglio remains in Piazza Aldo Moro, in front of the Assunta church, to be admired by everyone until the first Tuesday of October, the day of San Rocco.

The entire Villanovese community is involved in the assembly of the festive machine and actively participates in the ritual by gathering assiduously, starting in the months preceding the feast, in the rooms and courtyard of the preschool. The ears of wheat and oats that the farmers have harvested for this purpose arrive here, the best stems are selected and are prepared for processing by being immersed in water. Only when the culm of the ears is particularly elastic is it possible to create the different decorative elements: “trucinielli” have 2 to 8 stems, “braids”, “mirrors”, and “strips of split straw” are rolled up or cover larger surfaces. The straw processing technique is handed down from generation to generation and today it is a prerogative of all the younger ones who carry on the tradition of weaving, assisted by senior members of the community through collective participation.

It is not possible to establish a certain date for the origin of the giglio of Villanova but popular tradition associates it with an ex votos made by Costantino Ciccone in honor of San Giovanni Battista in the 1800s. Initially the ex votos consisted of an obelisk just two meters high, and later the structure became more complex and until 1930 two gigli are documented: one 25 meters high worked with the “gralito”, the most ductile wild oats without knots in the stem, the other smaller one, made with the soft wheat stalk. When the disastrous earthquake of July 23rd 1930 completely destroyed the village, the tradition was interrupted, but during this period the Villanova citizens went to the nearby community of Flumeri and every year, on August 15th, they contributed to the pull of the wheat giglio of that community made in honor of San Rocco. Only in 1986, on the initiative of the mayor Ottaviano Silano, the tradition of the giglio of Villanova for San Giovanni Battista was resumed and has not been interrupted since. The whole Villanovese community is deeply involved in the creation of the giglio and the rituals of the “lift” and “pull”. The participation of a large number of young people guarantees continuity for this tradition and both the municipality and the schools encourage their involvement through the promotion of workshop activities. Between 2002 and 2005 the pupils of Villanova middle school, assisted by Prof. Angiolina Di Cecilia, created a real “manual” that illustrates all the operational building phases of the giglio and straw processing techniques with photographs, in great detail: The Giglio of Villanova del Battista. Manual and History. Delta3 Editions, Grottaminarda, 2005.