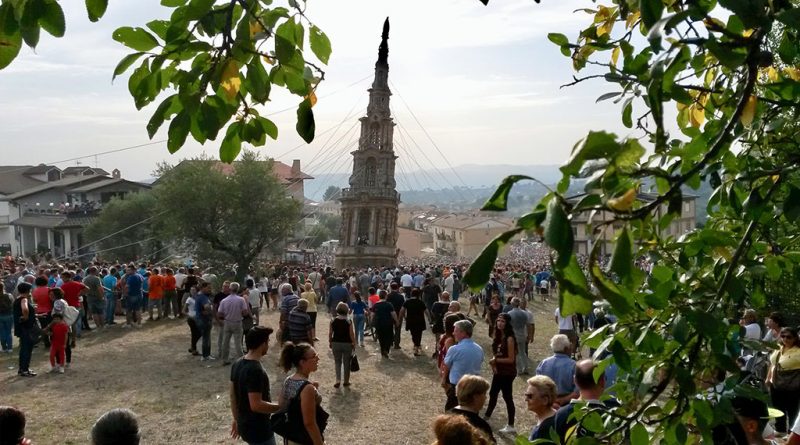 The tirata or “pull”, which is repeated every year on the Saturday preceding the third Sunday of September, represents the culminating moment of a ritual path started by the Eclanese community in the previous months, with the wheat harvest and the creation of decorative braids that cover the surface of the “big carriage”. This is the supporting base of the devotional machine which also consists of a wooden obelisk more than 25 meters high, covered with decorative straw panels and surmounted by the statue of Our Lady of Sorrows. The celebrations officially open on September 8th with the transport of the “carriage” and will close with the “pull” of the entire obelisk called carro, hauled by about 300 rope pullers and 6 oxen pairs that will take it from the Santa Caterina hill to the center of the village. The wooden structure of the obelisk consists of 7 layers covered with artistically worked straw panels. The first four layers, from bottom to top, are renewed every year by the artistic workshop of Giotto Faugno, while the last three are historical and are kept in the museum of Mirabella Eclano. The assembly of the machine ends on Friday before the feast.

The assemblage of the festive car and its decoration are to be executed exclusively by the workshop of Giotto Faugno, who inherited the technique and artistic secrets from his grandfather Luigi; on the other hand, the ritual of the “pull of the carriage” is in fact extremely democratic and all Eclanese people, regardless of age, gender and social origin participate. Everyone can pull the ropes but the more experienced workers, called “funaioli”, are entrusted with the ends of the main ropes and ensure the balance of the machine. No movement escapes the watchful eye of the “timonieri”, or men at the helm, who carefully guide the pull from the height of the first level of the float, where they are situated during the journey, in order to be able to simultaneously monitor the progress of the oxen and the tension of the ropes. There are also specific figures assigned to care for and hydrate the oxen during the procession. It is not possible to establish a secure date for the origin of the ritual of Mirabella’s “pull of the carriage” but popular tradition identifies the carriage with an ex voto made by the farmers (probably by the Tammaro family) in honor of Our Lady of Sorrows to ensure a fruitful harvest of wheat. The origins of the artistic machine in the form of an obelisk are attributed to the work of the artist Stanislao Martini and possibly go back to 1869, a date found on some pencil drawings that represent the project of an obelisk very similar to the baroque spiers characteristic of Neapolitan architecture of that period. In 1887 the Eclanese designer builder Prisco Alfonso Capodanno worked on a new project based on Renaissance models and in the 1920s Luigi Faugno, a pupil of Capodanno, devised the model of the obelisk most similar to the one in use today. In 1922 Luigi Faugno elaborated a handbook for the assembly of the Mirabella carriage titled “Mentario,” which indicates exactly the materials and the assembly technique of the wooden structure, and this makes it an essential document for the continuity of tradition. The aforementioned “Mentario” is a fundamental tool for the transmission of the construction and decorative technique of Mirabella Eclano’s carriage, but the most expert interpreter of this tradition is Giotto Faugno who is responsible for ensuring the passage of skills as well as technical and artistic abilities to the younger generations.