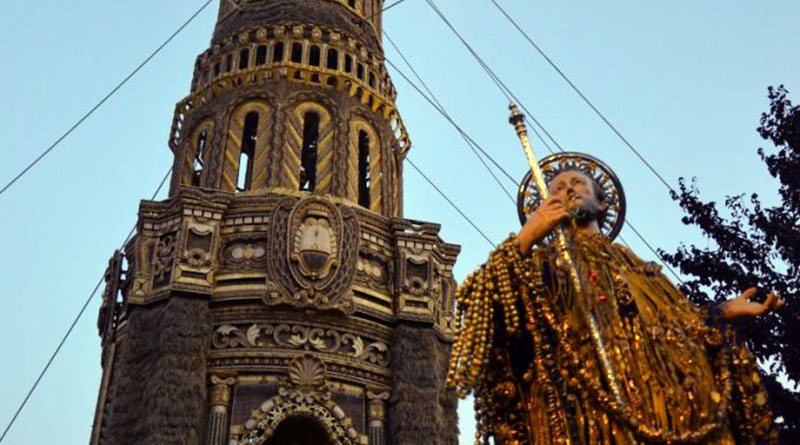 Flumeri’s “Pull of the Giglio” can be defined as a syncretic ritual practice that holds together the traditional peasant culture connected to the wheat cycle and the Catholic liturgical calendar. It is repeated every year on August 15th, and it represents the culminating moment of a ritual path started by the Flumerese community in the beginning of July, in conjunction with the wheat harvest, the careful selection of the ears and the creation of the “chains”, or the decorative elements for the external coating of the giglio. The devotional machine represents a votive offering to San Rocco and consists of a pyramidal obelisk about 30 meters high, divided into 7 levels and covered with decorative panels of wheat and straw artistically intertwined by women and teams of young people. On August 8th, with the ritual of the alzata or “lift” the giglio is brought upright. This operation is coordinated by expert carristi, or “floaters“ and it involves the participation of many Flumeri citizens who complete the arduous task with the help of their arms, ladders, pitchforks, poles and ropes. During Ferragosto’s afternoon, the giglio is brought from Campo del Giglio to the church of San Rocco by a tractor and by the “funisti” who help keeping it in balance by pulling thick hemp ropes. The route takes place in a festive atmosphere to the rhythm of the drums and it ends late in the evening with the proclamation of the winner of the Palio for the most beautiful decorations. The following day, on August 16th, during San Rocco’s procession, the winning team bears the honor of carrying the banner with the effigy of the Saint in front of the statue.

The entire Flumeri community is involved in the assembly of the festive machine and they actively participate in the ritual by regularly gathering in Campo del Giglio during the months preceding the feast. It is here that the ears of wheat that the farmers have harvested for this specific purpose are gathered, and the women begin to group them by shape, size and color and then they make them even more flexible by immersing them in water. Only when the neck of the culm is particularly elastic, they proceed with the intertwining of the “chains”. The teams of young people who work with the ears, whole or cut, the stems of the durum wheat plant, and the stems of the wild oat plant, cooperate at the construction of the decorative panels for the 5 facing floors. Each team has its own name and color and is comprised of around twenty participants, who on average are 17 years old. On the other hand, the construction of the structure is made by carpentry experts called “carristi” who also deal with the construction of the first level of decorative panels (the San Rocco level) and the tip of the giglio.

It is not possible to establish a certain date for the origin of the ritual of the “tirata del giglio” in Flumeri, but popular tradition associates it with an ex voto made by the farmers in honor of San Rocco, whose cult is documented in Flumeri since the end of the 16th Century. Initially the ex voto was made of simple bunches of ears that were tied around a wooden rod and were each unique. In the second half of the 19th Century, collective offers were made, and each district of the town began building its own float. At the beginning of the 20th Century, a single structure made of wheat began to be assembled, as a symbol of community unity, in the shape of a large Christmas tree hoisted on an agricultural carriage, pulled by oxen. Between 1968 and 1972 the carpenters Nicola Giacobbe, Rocco Del Sordo and Rodolfo Mandarino modified the structure of the devotional machine, shaping the current one, and replacing the oxen with a tractor that assured greater safety and stability. The whole Flumerese community is deeply involved in the creation of the giglio. The dedicated work is all voluntary and motivated by the devotion to San Rocco. The growing number of young people are a guarantee of the continuity of this tradition. The establishment of the Palio in the ’90s has increased their involvement.