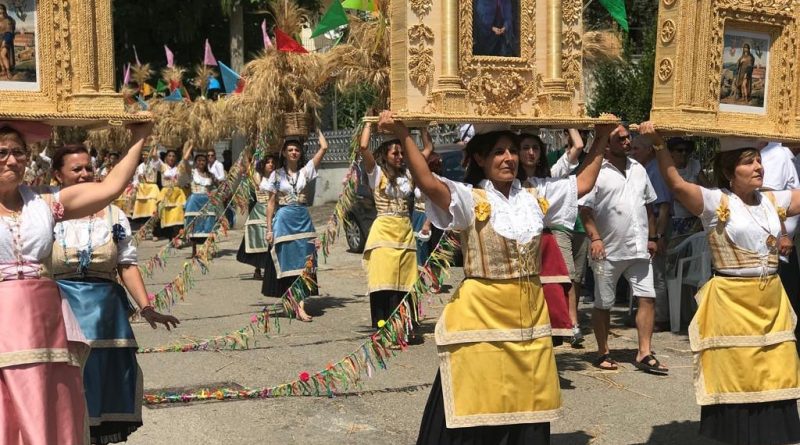 Foglianise wheat festival takes place every year August 8 -18th with a rich program of secular and religious events that energize the crowded center of the town. The highlight is the parade of wheat floats on August 16th. This centuries-old ritual consists of a festive procession that crosses the streets of the village, made of “wheat carriages”, about thirty extraordinary feast machines made entirely of woven straw, reproducing three-dimensional miniatures of façades, churches, altars, palaces or monuments of significant historical and artistic interest, preceded by the parade of the pacchiane, about 200 women in traditional costume with the gregna on their heads. The wheat carriages of Foglianise is a monumental work, the largest ones exceed a height of 4 meters and a width of 3 meters. Each float is made of a wooden deck built-to-scale, and the woven straw is assembled on it. Thanks solely to their manual skill, the “masters” of straw, through the art of weaving, create a scenographic style of a spectacular impact. Inspired by a simple photograph of the work, the masters reproduce frames, friezes, members, rosettes, statues, portals, alternating various techniques. The art and originality are the result of the master’s imagination, making each carriage unrepeatable.

The origin of the wheat festival can be traced back to the Roman thanksgiving rites in honor of the Ceres or Fortuna deities, later assimilated by the Christians. In 1656 the offerings in wheat were destined for the thaumaturge San Rocco to heal from the plague. Cardinal Orsini, future pontiff Benedict XIII, sent a relic of the saint to town igniting a devotion, and since then, the wheat festival has been characterized as an act of veneration for the Saint of Montpellier with carriages full of wheat carried in procession, on August 16th each year, towards his chapel as a gesture of gratitude. A manuscript known as “the book of Cannaruto”, a sort of Master Register in which, from 1730 to 1761, the economic report and other glimpses of city history were noted, is a precious testimony of the devotion of the Foglianese people with the particular expression of the processing of straw. The first “wheat carriages” were created for the pleasure of the farmers in decorating the effigy of San Rocco carried in front of the carriage full of wheat, pulled by oxen. The competition for the “favor” of the powerful saint incorporates the creation of ever larger and more finely decorated altars around the effigy of San Rocco, as well as the construction of real, scale reproductions of monuments and churches. The making of wheat carriages is a tradition handed down from generation to generation, it is a true pride and a unique characteristic of the Foglianise people, and it is a deeply rooted custom that still allows one to admire these extraordinary works of art as they are paraded through the town’s streets. The group of tractor drivers meets in the cellars, in the courtyards, in the garages to work on the carriage; each group of relatives, friends, neighbours is made of men and women of all ages with a specific division of roles. Every child of Foglianise from an early age learns to work the straw to make wheat carriages, and this keeps their passion alive, so that they pass on their acquired experiences and knowledge to new generations. There are no manuals where one can learn the weaving techniques. The required knowledge is learned by participating directly in the creations, while listening and following the advice of their elders. One begins his or her first work as a child and then learns with experience all the secrets until becoming a real master of straw.