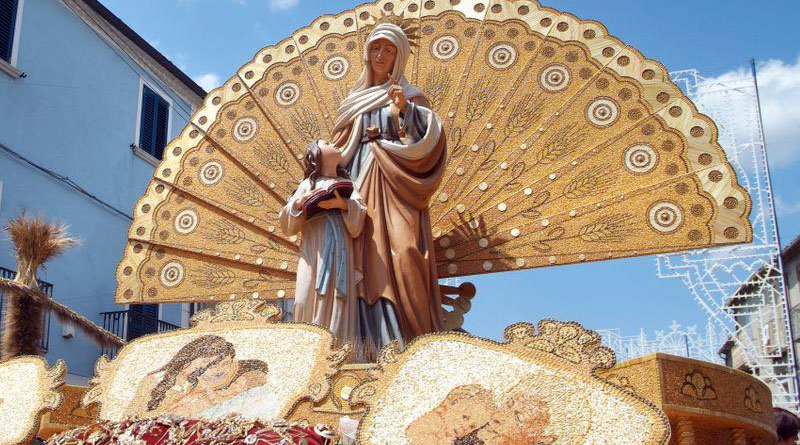 In the town of Jelsi in the province of Campobasso, the wheat festival is held every year on July 26th in honor of Sant’Anna.

The patroness of this small Molise village is celebrated with a spectacular parade of traglie (traditional agricultural vehicles used to transport the sheaves of wheat) and allegorical carriages pulled by animals or tractors, made of straw and wheat in ever new artistic styles, inspired by both traditional decorative elements, such as the inevitable pëlomme (rhomboid structures in straw), as well as more modern themes.

The religious pretext of the representation is the gratitude to the patroness for saving the country from the violent earthquake in 1805.

Starting at the end of June, the wheat for the floats and the traglie, the most beautiful durum wheat with a high trunk cultivated to this purpose, is harvested on the border with Puglia during a ritual involving the elderly farmers, women and young people of the village: everyone meets on the fields where they sing, reap, cook and eat together under the maternal gaze of the statue of Sant’Anna that accompanies them, watching over the operations in the manner of a pagan Demeter.

The harvested wheat is then blessed and it can be worked by the women who begin to make the very long braids that will adorn the town. Over the course of several weeks, older women come together to work with younger ones for many hours a day. The wheat must be cleaned, selected and then soaked so it can be easily weaved. Meanwhile, in the garages and workshops prepared for the occasion, the youths, led by expert craftsmen, make the carriages trying to keep the theme secret until the day of the feast.

At dawn on July 26th, while the blessed bread of Sant’Anna is distributed, the floats gather along the main road of Jelsi and from there they parade accompanied by the band and folk groups to Aia di Sant’Anna where the trailing oxen kneels before the patron saint to receive the blessing, along with the brides, young Jelsians who were married during the past year.

The Jelsi wheat festival has been awarded the European Year of Heritage 2018 mark recognized by MIBACT as an activity capable of encouraging the participation and enhancement of cultural heritage as a shared resource, raising awareness of history and common values ​​and strengthening the sense of belonging to Europe.