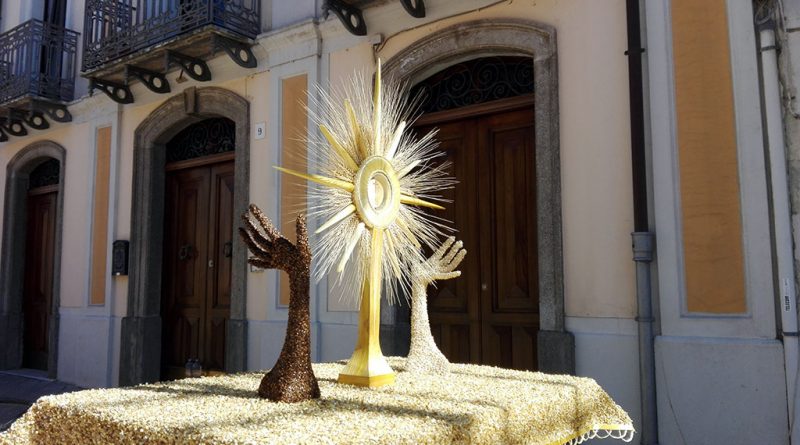 The festival of wheat carriages is repeated every year in San Marco dei Cavoti on the second Sunday of August, and it has a religious character since the carriages are made by the various San Marco districts with the function of ex voto in honor of the Madonna del Carmine. Just before noon, the pop of the firecrackers begins the parade of floats in procession through the streets of the town, preceded by the statue of the Madonna dressed in gold from the Confraternity of Maria SS. del Carmine and Monte dei Morti. The procession, accompanied by the musical band, crosses the main streets of the center and then it reaches the belvedere in front of the church of San Marco Evangelista, where the Madonna stops before mass and devotees enjoy a fireworks display that dazzles the valley. Meanwhile, the floats remain stationary in Piazza Risorgimento and along Via Roma to be admired by bystanders. The celebrations begin on Saturday evening and continue on the following evening when the feast resumes with a prize to the most beautiful float and then concludes with a musical show.

The Confraternity of Santa Maria del Carmine takes care of the religious organization of the festival while the artistic floats are made by the citizens of San Marco who in the previous months gather in groups for the artistic processing of straw and wheat. The meeting places become real workshops where men and women, the elderly, youths and children work together, passing down traditional techniques and experimenting with new ones. In the last few weeks before the party, work also happens at night. The carriages of wheat are constructed with multiple techniques: weaves, ironing, mosaics, using entirely the wheat plant, from the grain to the stem, up to the ear, as well as barley, oats and rice grains. The theme of the float must remain secret for the opposing districts until the day of the feast.

According to popular legend, the festival of wheat carriages originated in the early 18th  Century following a meteorological phenomenon called “small glaciation,” which caused continuous rains throughout the month of July, preventing farmers from scognare (threshing) wheat. The wheat had already been collected and deposited on the threshing floors but since the rain did not allow it to be processed, the farmers turned to the Madonna del Carmine asking her for the miracle and carried her statue in procession to the bridge of San Rocco of Porta di Rose. The elderly say that when the Madonna arrived there the rain suddenly stopped and the stream’s waters visibly subsided. From then on, the farmers began to organize the feast by donating part of their harvest to the Madonna as a sign of gratitude. So initially the carriages were mainly votive offerings and had a very simple structure consisting of sheaves of wheat lying on traglie (wooden carts without wheels) pulled by animals. After the parade, the threshing of the carts took place in the farmyard, in the Ariella area, and the wheat obtained was sold to pay for the festival. Although at the time the prevailing criterion was quantity, the farmers still tried to embellish their compositions with multicolored ribbons and other ornaments, or by giving particular shapes to the sheaves placed on the carriages and pulled by oxen. Only in the 1980s did artistic carriages pulled by tractors take over, with ears, stalks and grains of wheat and other cereals to compose increasingly complex allegorical paintings. Today, the harvesting of wheat is no longer done by hand with a sickle but it involves the use of combine harvesters that directly transform the ear into a grain. The wheat from the carriages is no longer sold to pay for the feast which is now supported by sponsors and above all the “questua,” or the donation that each family makes in honor of the Madonna. Although young people are increasingly less present in San Marco, the tradition of artistic floats is tenaciously carried on thanks to the dedication of elders in some districts such as the Franzese, the Zenna, the Fontecanale, and even some fellow townsperson who emigrated to Germany and returns every year to work on carriages and explain traditional manufacturing techniques to new generations.

In recent years, however, the sense of tradition is returning thanks to the commitment of schools. The Istituto Comprensivo di San Marco dei Cavoti, thanks to PON funds, has started a training course and is interconnected with the territory: the middle school kids interact with the elderly who teach them how to process wheat and, with them, make the artistic carriages curated by the school. The PON Project “The tradition of wheat: from the past to the future!” consists of a creative and artisanal workshop for the enhancement of local vocations, aimed at students, which provides for the participation of parents and the collaboration of the local association: IRIS ACLI LAND. The entire curriculum focuses on acquiring straw and wheat processing techniques for the production of carriages that are presented on the occasion of the traditional “Festa dei Carri” during the Summer. The idea of ​​this project originated from the desire to encourage the transmission of the art of processing straw from the elderly or adult people to new generations, so that they can maintain and preserve this important tradition. Beyond the acquisition of wheat processing techniques, the project contributes to making children aware of their organizational, working and artistic skills so that they enthusiastically engage in groups for the realization of the Artistic Carriage.