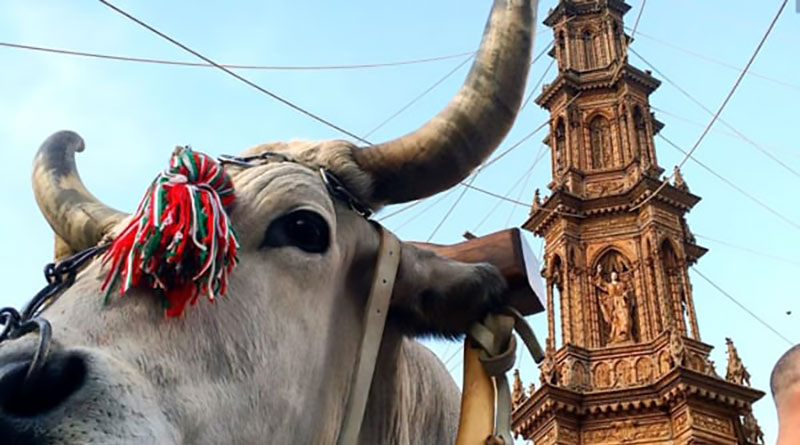 The tirata or “pull”, which is repeated every year on August 14th, represents the culminating moment of a ritual path started by the Fontanarosa community in the previous months, with the harvest of wheat, the selection of the best wheat ears and the creation of decorative braids for the covering of the carrettone, or big carriage, by the Fontanarosa women led by Pasqualino Cappuccio. The carriage is the supporting base of the devotional machine which consists of a wooden obelisk, 27 or 28 meters high, divided into 8 levels and covered with artistically woven decorative panels made of straw. The last two sections make up the dome and are covered by the trunk on which the statue of the Madonna della Misericordia rests. The celebrations begin on August 8th with the so called “lift of the dome”. The rising of the dome is to be done by expert carpenters, “flying men” also called “rope angels” who move easily through the complex wooden framework at over 20 meters high. The structure of the carriage consists of 20 wooden poles held together according to medieval carpentry techniques with joints, bolting and tying with hemp ropes that provide elasticity to the machine. The first operation consists in the lift of the central pole which is kept in balance by a series of ropes. After this first phase, the main pole is in a vertical position and is held in balance by other ropes. Two winches are set in motion with a system of levers, pulleys and rollers that slowly raise the dome. When the statue of the Madonna reaches the top of the structure the feast can begin. In the following days the parade of “gregne” is celebrated – from the Latin ‘grĕmĭa’ (m), derivative of ‘gremium’, or ‘sheaf’ – and, the sheaves of wheat are carried in procession on the head by men and women dressed in traditional clothes, coming from the countryside just outside the town, to the rhythm of ancient dances and songs accompanied by the accordion. The expert carpenters then proceed to assemble the float covering with the decorative straw panels and finally, on August 14th, the ritual of the “pull” takes place and the carriage is towed along the main road of the village, thanks to the strength of 2 pairs of oxen and the whole community that maneuvers the ropes.

The assembly of the festive machine and its decorations are entrusted to the skill of expert carpenters and local architects who have handed down the technical and artistic secrets from father to son.

It is not known for certain when the ritual of the tirata of Fontanarosa originated, but popular tradition identifies the float as an ex voto of the peasants in honor of the Madonna della Misericordia to implore her protection and in order to have a bountiful harvest. Even before the advent of Christianity, ritual practices based on the offer of wheat to the deities, in particular to the goddess of the harvest Demeter/Ceres, were commonplace throughout the Mediterranean region to promote fertility. The form of the first votive machines was likely that of an agricultural carriage decorated simply with sheaves of wheat and then, with the advent of Christianity, the same group embraced the patron saints and the Virgin Mary and in turn made the machines more and more spectacular. According to some sources, the model of the Fontanarosa obelisk machine derives from the 18th Century models of the festive apparatuses that appeared in Naples under the Spanish viceroyalty, inspired by the architectural model of the Baroque obelisk and in particular that of the Immaculate Conception in Piazza del Gesù in Naples. The first version of the carro is attributable to the “apparatus decorator” masters, Generoso and Stanislao Martino, who moved from Naples to Fontanarosa in the mid-19th Century. This first model was then gradually transformed to today’s neo-Gothic form due to the work of Mario Ruzza who elaborated upon various drafts from 1948 to 1972. The tradition is handed down to the younger generations through artisan workshops on the processing and weaving of straw that take place continuously in the former church of San Sebastiano with the active participation of school children.